“Once upon a time a special person was born who was destined to make his little dent upon the scheme of things to come. Everything he has done has had some influence upon his musical buddies  and friends.  Thanks, Ed, for being a part of each of our lives.” —Ricky Araiza Barcelona, Spain

My first memory was at 3 years old, living in Honolulu, HI, pouring green paint into a toilet, then adding black paint, flushing it and watching it mix with the green, swirling down the drain. I was basically raised in the USA— in California, Texas, Kentucky, Illinois, Connecticut, Key West, Florida. Raised by relatives and strangers.  Every year or so I would be “Movin’ on.” I graduated from Hoover High School, in San Diego, Class of 1949.  The next day I joined the Navy for one hitch.  I’m now considered a Korean War Veteran, but I was never in Korea. After the Navy, I joined the SD Police Department for a few years before realizing that wasn’t where I was supposed to be — so I Moved on.

In 1961, I helped start “The Blue Guitar” music shop in San Diego with two friends and stayed with that for 12 years. (The Blue Guitar is still going today.) During that time, I was a founding member of the first Bluegrass band in San Diego, “The Scottsville Squirrel Barkers.” 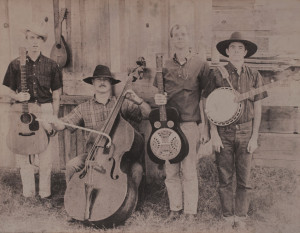 Some of the members have since become world famous in country music, and believe it or not, we are still friends. I played bass for several Folk music groups, went to LA, managed several Folk rock groups, and then continued Movin’ on.

In the late ‘70s, I got rid of almost everything I owned,and with a lump of money, I bought a one-way ticket to London, and spent about a year wandering all over Europe. On my tour, I spent a lot of time in Barcelona, Spain, and became fascinated the the tile works of Gaudi.

When I turned 80 in 2010, I said to myself, “I’ve only ever been a mediocre musician; with the time I have left, I want to do what I do best.”  So, I’ve started doing “Tile Art Impressions” of things I’ve seen and liked in my travels, inspirations taken from the works of other artists I admire, and whatever strikes my fancy. I create portraits, panels, and logos from cutting and shaping ceramic tiles.

My concept is a little different from other Tile artists— I don’t do mosaics; I don’t do sculptural pieces. Those are beautiful, but not my style.

I cut ceramic tiles into individual pieces and fit them together like puzzle pieces into images of portrait size.  I frame them for display; sometimes

Each portrait is one of a kind.  No computers. All pieces are done by hand. When I finish with one portrait, I Move on to the next one. I’ll be

85 on July 6th, and I’ve created over 70 pieces since I turned 80.  I’ve posted on this website a sampling of my motifs …hope you like them.